Telophase was destined to be more than a 90’s coffee shop idea to nurture the technology musings of its founders. With the advent of the Internet as the backdrop, Jamil Husain, Telophase’s CEO, assembled a motley crew of individuals: an eager web developer, a seasoned software architect, and an engaging high-performance data network manager from NASA. Together they aimed to put a humanist slant on corporate governance—informed by science and motivated by compassion.

Each week the team would meet at a public library and invite a guest participant for raw, unadulterated, and unfiltered discourse that included novel topics (for those times) like credit card transactions, virtual reality, Internet music, and distributed computing. With an infusion of ethos that technology was pervasive, and emerging innovations were inevitable life improvements, nothing could stop the crew.

In 2008, their core values provided the nudge to pivot towards a strategic vision for organic growth. With only two and half years remaining on Telophase’s 8(a) certification, the team landed the first, directly marketed 8(a) contract at NASA. Since then, what drives us continues to move the needle, and today we are fulfilling our earliest aspirations. Our engineers and technologists are performing breathtaking tasks with uncommon results for some of the nation’s leading agencies. 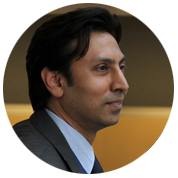 Jamil Kamran Husain is an experienced technology executive with history of success supporting both government and commercial enterprises. Mr. Husain has held the role of CEO of Telophase Corporation since 2008. In his capacity as CEO, Mr. Husain presides over the business strategy and oversees all qualitative aspects of corporate finance, customer engagement, and employee care of Telophase. Under his stewardship, Telophase has achieved “Excellent” ratings in the Federal Government’s CPAR system for its performance as a government performer and achieved its ISO 9001:2008 certification for quality management. Mr. Husain brings over 20 years of lauded experience within various government programs in agencies such as the DoD, Department of State, and NASA. Mr. Husain holds dual degrees in Computer Science and Electrical Engineering from the George Washington University.